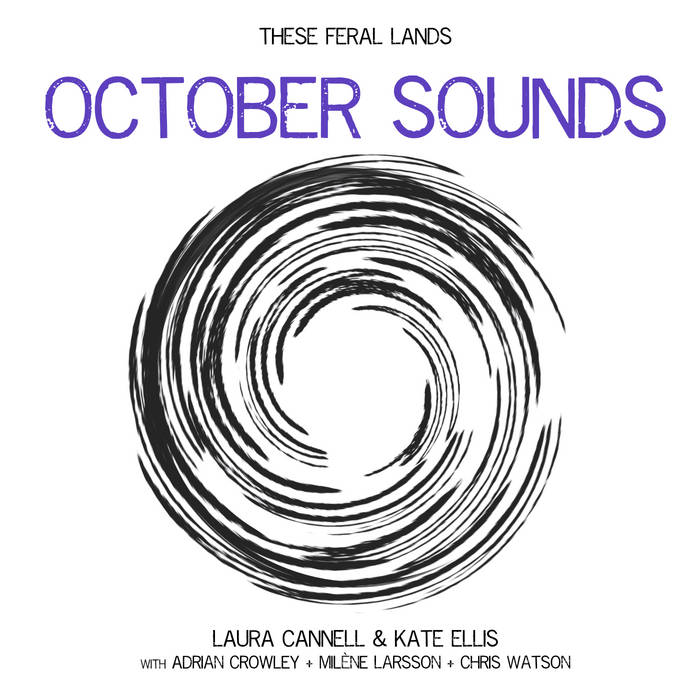 For October Sounds we invited some very special friends to join us, we have composed new works in collaboration with contributions from the following brilliant humans:

We have incredible nocturnal forest recordings from the Sound Recordist Chris Watson (Bafta Award winning sound recordist whose works include Frozen Planet, many David Attenborough programmes and much more).
We have a new and specially written chilling New York based story from the singer, composer and songwriter Adrian Crowley (who has just returned from an extensive European tour in support of his ninth studio album, The Watchful Eye Of The Stars).

To complete the magical trio of guests we have the retelling of a Swedish folk tale by the Executive Director and Documentary maker Milène Larsson, (Milène made the first documentary about the young forces behind the global youth climate strikes with Greta Thunberg in 2019 amongst many other accolades).

Laura Cannell and Kate Ellis are joined by three very special guests for their 10th EP of 2021, the Ireland based Singer, Composer and Songwriter Adrian Crowley, the Swedish Filmmaker and Executive Producer Milène Larsson and the British Sound Recordist Chris Watson.

Autumn is the time for stories and as we watch the nights draw in, this set of 4 nocturnal tracks travel from Sweden to Northumberland to New York. They have a dusk-lit hue and are full of creatures and stories to chill us by a warming fire.

OCTOBER SOUNDS takes us to ancient woodlands as heard through the ears of Chris Watson, with a chilling new story written and narrated by the musician/composer Adrian Crowley. There is a new version of a Swedish traditional folktale embedded in memory and re-told by Milène Larsson. These stories are bound together with the violin and cello playing of Cannell and Ellis as they respond to the changing months of 2021 through their year long project ‘These Feral Lands - A Year Documented in Sound and Art’.

1. NÄCKEN
“I first heard the myth of Näcken as a child, we all did in Sweden. He's a male equivalent of a river mermaid, a beautiful man who plays the violin so enchantingly that he lures people into the water to drown. This old folktale dates back over a thousand years. There are several versions of him in Norse mythology and in Germanic folklore, where he is known as "Nix". There's even a related word in old English, "Nicor," which means water spirit or water goblin."

2. CLOAKED BY RAVENS WINGS
Ravens over the forest - Blair Atholl
“Arriving from out of the south, like particles of distant smoke, dozens and then hundreds of ravens call and respond on whirring wings before they are cloaked by the coniferous forest.” Chris Watson

3. BLUE IS THE COLOUR
“I like to describe this story as Cerulean Malaise or, on other days, Ultramarine Angoisse. It depends on my mood. Set in New York City, the idea for the story developed in my mind over time, after recalling a protracted incident from many years ago when an acquaintance of mine appeared to be turning blue over the course of several days. And the bluer he got in appearance, the bluer he seemed to get in spirit."

4. WITHIN THE FOREST DARKNESS
Tawny owls and roe deer in the forest at midnight - Thrunton Woods, Northumberland
“From Coe Crags to Castle Hill tawny owls communicate, commute and hunt within the forest darkness. Throughout a difficult night for small mammals its only the roe deer that break the stillness on the forest floor.”
Chris Watson

About Laura & Kate:
Since meeting in early 2020 the duo have developed a strong writing partnership and produced an album ‘These Feral Lands: Volume 1’ in collaboration with Writer & Comedian Stewart Lee, Winter Rituals EP (broadcast widely on BBC Radio 3 inc. Christmas Day and New Years Eve), and now 10 monthly EPs. In April 2021 they were Spotlight Artists on BBC 6Music Recommends with Tom Ravenscroft, and appear on SOHO Radio & NYC + Culture each month as guests of Max Reinhardt to play and discuss their new EPs.