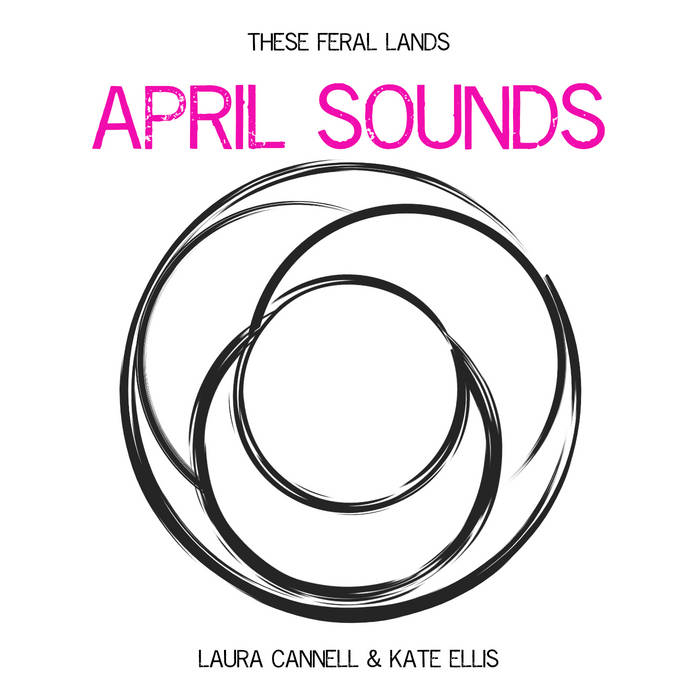 APRIL SOUNDS from UK and Ireland based Laura Cannell and Kate Ellis is part 4 of a series of releases which are written, recorded and released every month throughout 2021, featuring Cannell’s signature evocative overbowed violin, viola and vocals alongside Ellis’s deeply expressive cello and double bass playing.

What makes the APRIL SOUNDS EP so exciting is that it is energised by the coming of spring, and like the birds who sing at dawn to celebrate that they made it through the night again, the duo have made it through the winter. Early April may bring snow and hail but it is now contrasted with shards of piercing sunlight, early blossoms and there is an excited air about the future again.

The idea behind the series is to explore how the musicians and their creativity changes through the year, to genuinely reflect the emotions of each month in the music without pre-planning it. Listening back you can begin to hear the changes occurring between January, February, March and now April. This month has a brightness in tone and feel that could not have occurred in the true depths of winter.

Track Listing:
GOLD EDGES
When things feel broken we can reconstruct them into something new and even more beautiful. Like the ancient Japanese art of Kintsugi (“Golden Repair”), Gold Edges takes our difficult or
broken emotions and cultivates a brittle fiddle line with luscious cello and overbowed violin into something new, something simultaneously energetic and dreamlike.

WHERE WILD GARLIC FLOWERS GROW
Wild Garlic (creamh) flowers covering the path as we emerged from hibernation… On return to Ireland Kate’s garden was grown over with Creamh. We jokingly said she should write music about Wild Garlic and it became clearer that the most common things hold the most magic. In Irish folklore bears would eat wild garlic as they emerged from hibernation and cloves of wild garlic were planted for good luck in the thatch of Irish cottages as it was thought to deter fairies.

3. HOLLOW SHIELDS  Pizzicato droplets are recorded over the phone, like water splashing onto our wooden shields, we are ready.

4. THESE ARE THE BIRDS THAT RETURN
“What Birds are these? That come from the Ocean. These are the Birds that Return.”
This song was created from fifteen words of a fragmented poem by the ancient Greek Alcaeus (born 625bc). It’s a reminder that some things have not changed in centuries and no matter what happens, the birds will return and spring will come again.

About The Project
This release is the fourth in a series of twelve which is part of a major new project:
THESE FERAL LANDS – A Year Documented in Sound and Art. An ambitious and exciting creative documentation of 2021 resulting in new music and films created and released monthly, along with a column published at Caught by the River.
April’s film is by the Irish artist Rory Tangney. The project is supported by Arts Council Englands National Lottery Funding.

About Laura & Kate :
Since meeting in early 2020 when Laura was commissioned by Alex Groves of SOLO to write a solo cello piece for Kate, the duo have since developed a strong writing partnership and produced 6 releases; an album ‘These Feral Lands: Volume 1’ in collaboration with Writer & Comedian Stewart Lee, Winter Rituals EP (broadcast widely on BBC Radio 3 inc. Christmas Day and New Years Eve), and now 4 monthly EPs January, February, March and now April Sounds.

In April 2021 they were selected as Spotlight Artists on BBC 6Music Recommends with Tom Ravenscroft, and appear on SOHO & NYC + Culture Radio each month as guests of Max Reinhardt to play and discuss their new EPs.

Kate: Cellist Kate Ellis is dedicated to the performance and exploration of all music. Kate is the Artistic Director of Crash Ensemble, cellist with Martin Hayes’ newly formed Common Ground Ensemble and is often seen playing with the musicians of Yurodny, TRE trio and Fovea Hex. Kate is the recipient of an artist residency at the Centre Cultural Irelandais, Paris for 2020/21.
www.kateelliscello.com