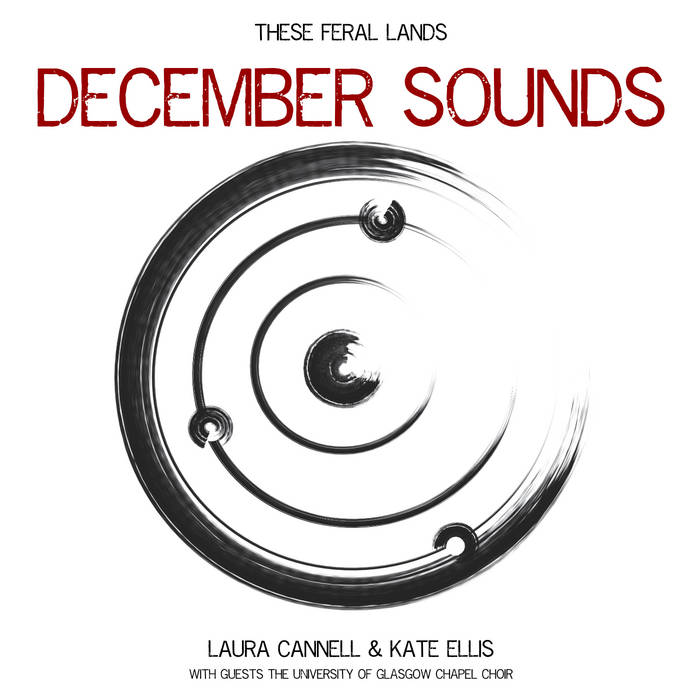 DECEMBER SOUNDS is the final of a series of 12 EP releases which were written and  recorded remotely between England and Ireland, and released at the end of every month throughout 2021. Laura Cannell and Kate Ellis have come full circle creating a new body of work which is both contemporary and personal.

For the final set, they draw on ancient carols and folklore sayings, building new music from musical fragments and improvisations, always trying to capture the emotions of the time in which they are creating. For the opening track they are joined by special guests the University of Glasgow Chapel Choir, Directed by Katy Lavinia Cooper.

In this yearlong project Laura and Kate have produced an epic 48 new tracks (the equivalent of about 4 full length albums). They have journeyed around the sun together, sharing ideas, improvisations and melodies and creating a space in which no sound is lost.

At the core of this substantial body of new music is Cannell’s signature violin and overbow violin sound and Ellis’s expressive cello playing. These sounds are the common thread throughout the music of the year alongside an array of instruments: Viola, Crumhorn, Hulusi, Recorders, Church Pipe Organs (in Essex and Suffolk) and Voice. Special guests Rhodri Davies, Stewart Lee, Chris Watson, Milene Larsson, Adrian Crowley, Adrian Hart, and the 32 piece University of Glasgow Chapel Choir Directed by Katy Lavinia Cooper joined Laura and Kate along their journey through autumn and winter adding colour, sound and stories.

1. FARE THEE WELL TOGETHER
The Glasgow University Chapel Choir sing our new version of the 16th century Coventry Carol, stripping away the words and changing the meter. 32 voices were recorded in the impressive Glasgow University Chapel with the rain beating against the windows, and the wooden door at the top of the tower swinging and banging in the stormy winds.
Inspired by a conversation with her dad about her grandad (who she never met), Laura took the words he would say, instead of goodbye “Fare thee well together”, in a broad Norwich accent which would rise in pitch half way through. As the Carol ends and the choir leave the chapel, Kate is left alone picking fragments from the air and playing softly to herself.

2. IN MEMORY & LIGHT  We kept playing to let in the light, even when it felt like there was none.

3. TOGETHER WE CIRCLED THE SUN
We have circled the sun.
We have passed through spring, summer, autumn and winter.
We have shared our inner most thoughts and feelings.
Through light and dark we have been true to ourselves and to you all.

4. FOR THE EQUINOX
We stole the melody from the medieval carol ‘Nowell, Nowell: Tidings True’ a melody which has been used in sacred and secular traditions. We fragmented the roots of the tune making our offering for the Winter Equinox. A track which brings together all of the disparate rituals of the darkest season.

About The Project:
This release is the final in a series of twelve EP’s as part of a major yearlong project: THESE FERAL LANDS – A Year Documented in Sound and Art. An ambitious and exciting creative documentation of 2021 resulting in new music and films created and released monthly, along with a column published at Caught by the River. December’s film is by Laura Cannell.

About Laura & Kate:
Since meeting in early 2020 when Laura was commissioned by Alex Groves of SOLO to write a solo cello piece for Kate, the duo have since developed a strong writing partnership and produced 14 releases; an album ‘These Feral Lands: Volume 1’ in collaboration with Writer & Comedian Stewart Lee, Winter Rituals EP (broadcast widely on BBC Radio 3 inc. Christmas Day and New Years Eve), and now 12 monthly EPs. In April 2021 they were selected as Spotlight Artists on BBC 6Music Recommends with Tom Ravenscroft, and appear on SOHO & NYC + Culture Radio each month as guests of Max Reinhardt. Their
music has been played each month on RTE Radio and in October 2021 Laura and Kate were featured in an Irish Times article.

Kate: Cellist Kate Ellis is dedicated to the performance and exploration of all music. Kate is the Artistic Director of Crash Ensemble, cellist with Martin Hayes’ newly formed Common Ground Ensemble and is often seen playing with the musicians of Yurodny, TRE trio and Fovea Hex. Kate is the recipient of an artist residency at the Centre Cultural Irelandais, Paris for 2020/21.
www.kateelliscello.com

The University of Glasgow Chapel Choir: UGCC is directed by Katy Lavinia Cooper, they record and tour nationally and internationally and have recorded several CDs. There are thirty-two regular members (a mixture of volunteers, paid choral exhibitioners and professional lay clerks) plus around ten associate singers who join them for concerts. Concert work has included the premier of Matthew Whiteside's Always ever unknowable during the Cottiers Chamber Project (2016), Martyn Bennett's GRIT and Bothy Culture (Celtic Connections and Edinburgh International Festival, 2016, 2017 and 2018), and the Scottish premieres of several pieces by James MacMillan, as part of Celtic Connections.
www.chapelchoir.org